In this section we are going to explain in more detail how the Interactive Track of the DAVIS Challenge works. Find more information in this publication.

The interactive track is built on the DAVIS 2017 dataset. The video sequences in the train, val and test-dev subsets have been manually annotated with scribbles. The annotators were instructed to label all objects of a sequence in a representative frame (not necessarily the first frame of the sequence as in the semi-supervised track).

For every sequence in the train, val and test-dev subsets of DAVIS 2017, there are 3 different sets of scribbles annotated by different users. The figure below illustrates an example of three different user annotations on the same sequence dogs-jump. Note that annotations were performed on different frames, chosen by the respective users. More information on how to download the scribbles in the Installation guide. 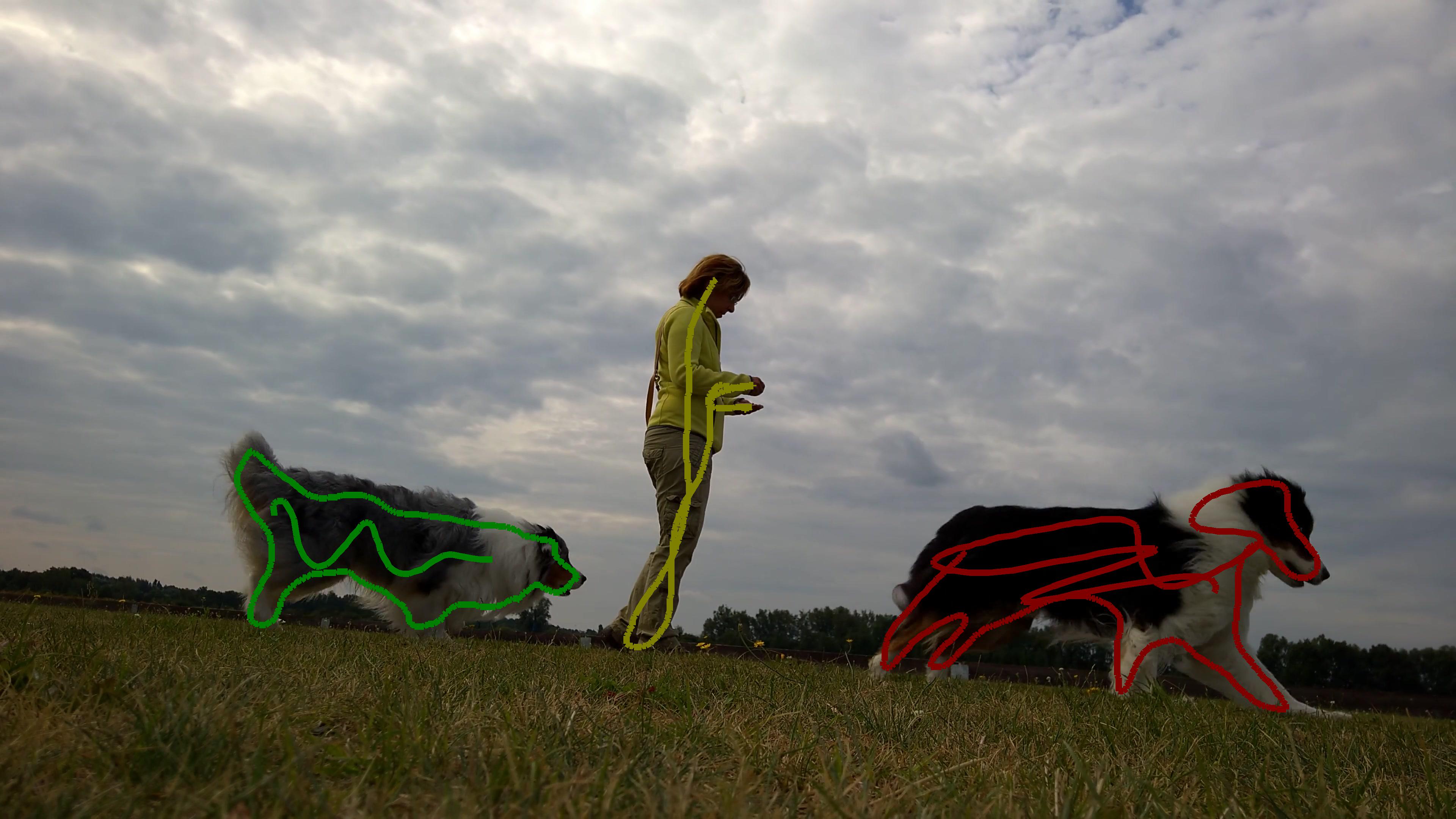 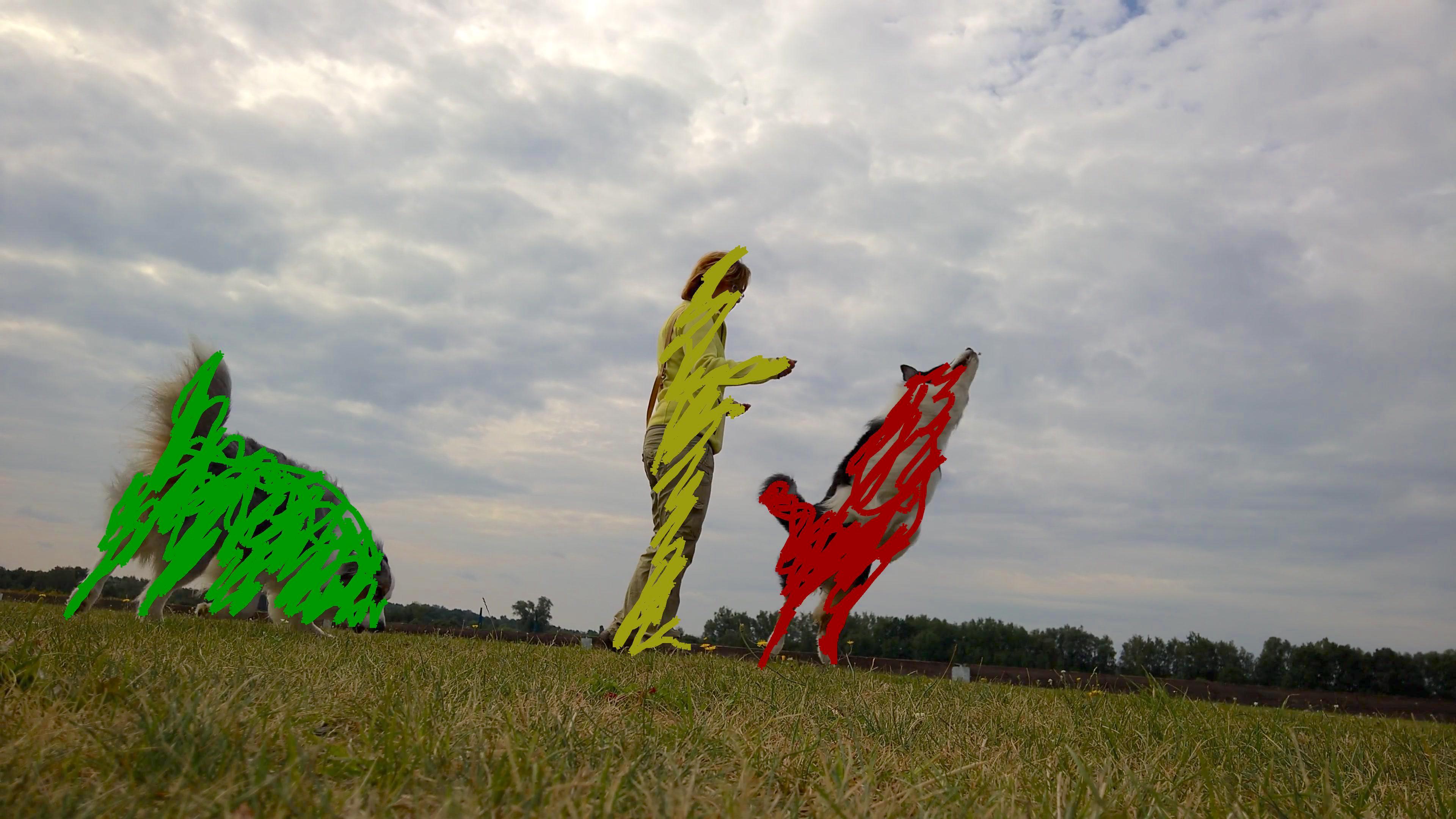 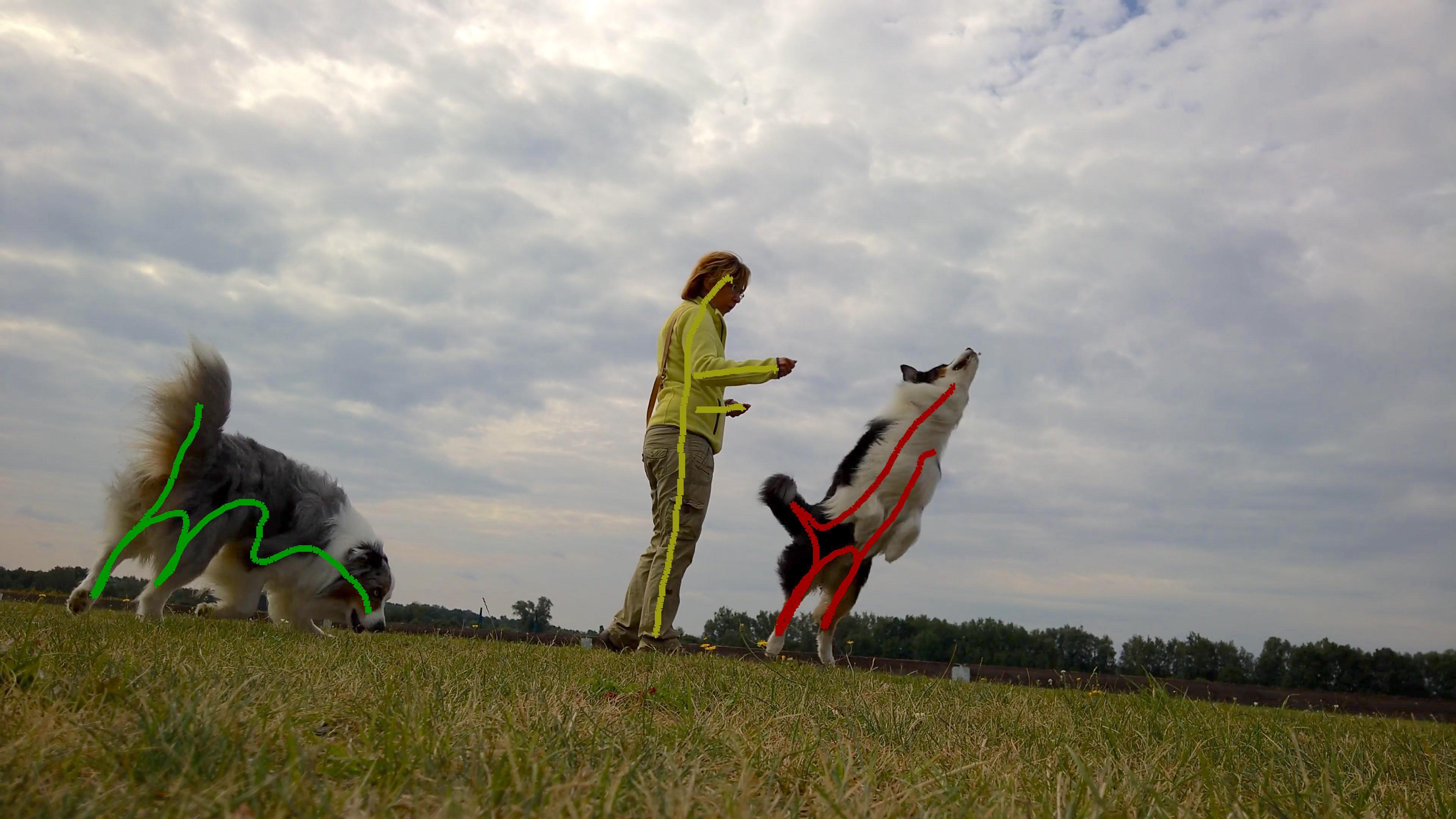 The workflow to evaluate these interactive models is as follows. To start, a video sequence and a scribble for each object in a certain frame is given to the user.

Since there are 3 annotations per each sequence, the same sequence is evaluated multiple times, starting from different human annotated scribbles.

Then, the user's model has to predict the segmentation masks for all the frames in the sequence, taking into account the given scribbles. As timing is important, the time taken to perform this prediction is measured. After that, the user submits the predicted masks to a server that returns a new set of scribbles for this sequence, simulating a human interaction. The returned scribbles are all in the frame with the worst prediction from a list of frames specified by the user (by default all the frames in the sequence).

In the following images, we show an example of the simulated human interaction. In the left, the mask predicted by the method given the scribbles from the previous interaction(s) is shown. Once the results are submitted and the frame with the worst performance is computed, the additional set of scribbles generated is shown in the right image. The robot focuses on the areas where the prediction error is the highest and tries to give feedback, as a human would do. These scribbles can either be in false positive or false negative regions. 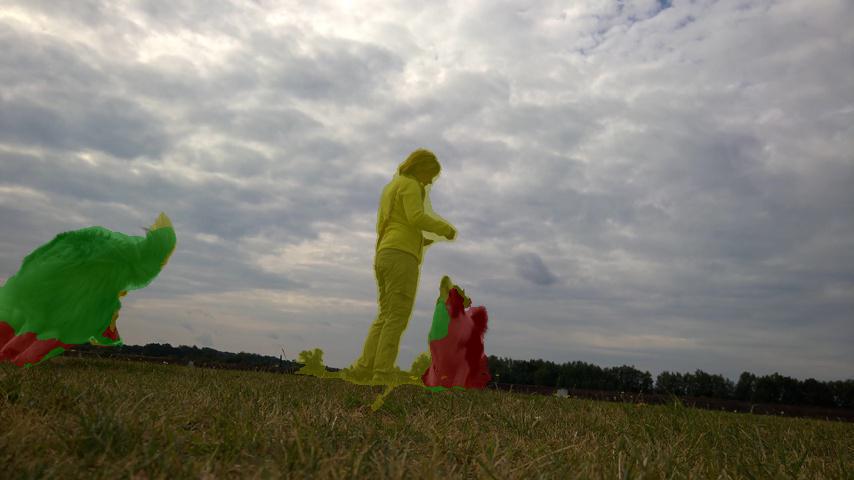 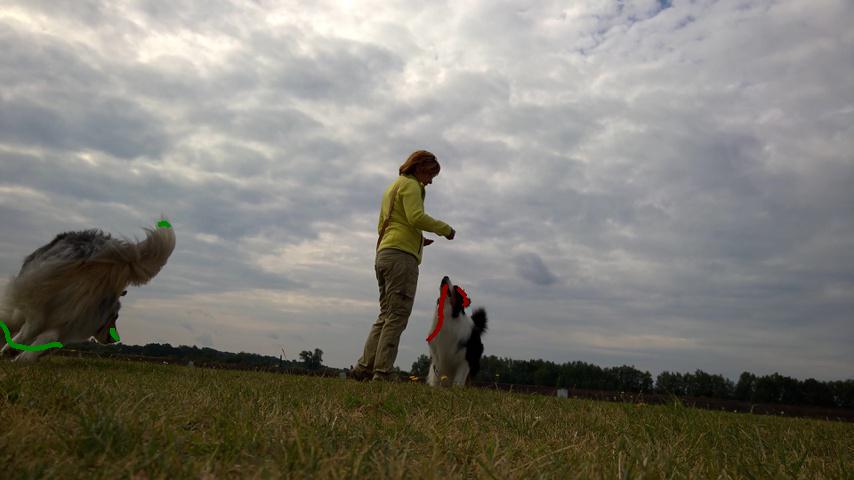 The additional scribbles given to the user should be used by his/her model to estimate again the masks. This procedure is repeated until a maximum number of interactions or a timeout is reached. The timeout is proportional to the number of objects in the sequence.

This framework also provides the possibility to evaluate the methods locally. Local evaluation is possible only for the train and val subsets.

In order to submit results to the interactive challenge, this framework allows to evaluate models agains a remote server. For remote evaluation, only the test-dev subset is available and the results are used for the ranking of the challenge.

In order to participate to the challenge a registration is required. To register, please go to https://server.davischallenge.org and fill in the form with your information. A mail will be sent to the provided email with a user key required for the remote evaluation. This key should be introduced in your code in order to identify your submissions. See the Usage guide for more details.

In addition, when the evaluation session has finished and a global sumary of the session has been generated, a session ID is given to the user. This session ID allows users to identify their run and show it in the leaderboard.

The evaluation metric used to evaluate the predicted masks is the mean of the Region similarity \mathcal{J} and the Contour Accuracy \mathcal{F} (more information of the metrics here). The time that each method takes to make a prediction is also taken into account. The average \mathcal{J}\&\mathcal{F} for all objects and for all starting scribbles is reported in every interaction. We are aware that some models may hit the timeout and not reach the maximum number of interactions. In this case, for every sample with missing interactions, the evaluation of these particular interactions is the same as the last interaction performed with 0 time cost.

At the end, a curve showing \mathcal{J}\&\mathcal{F} as a function of Accumulated Time is generated. In the following example you can see an example of how the curve looks like for a baseline method Scribble-OSVOS: 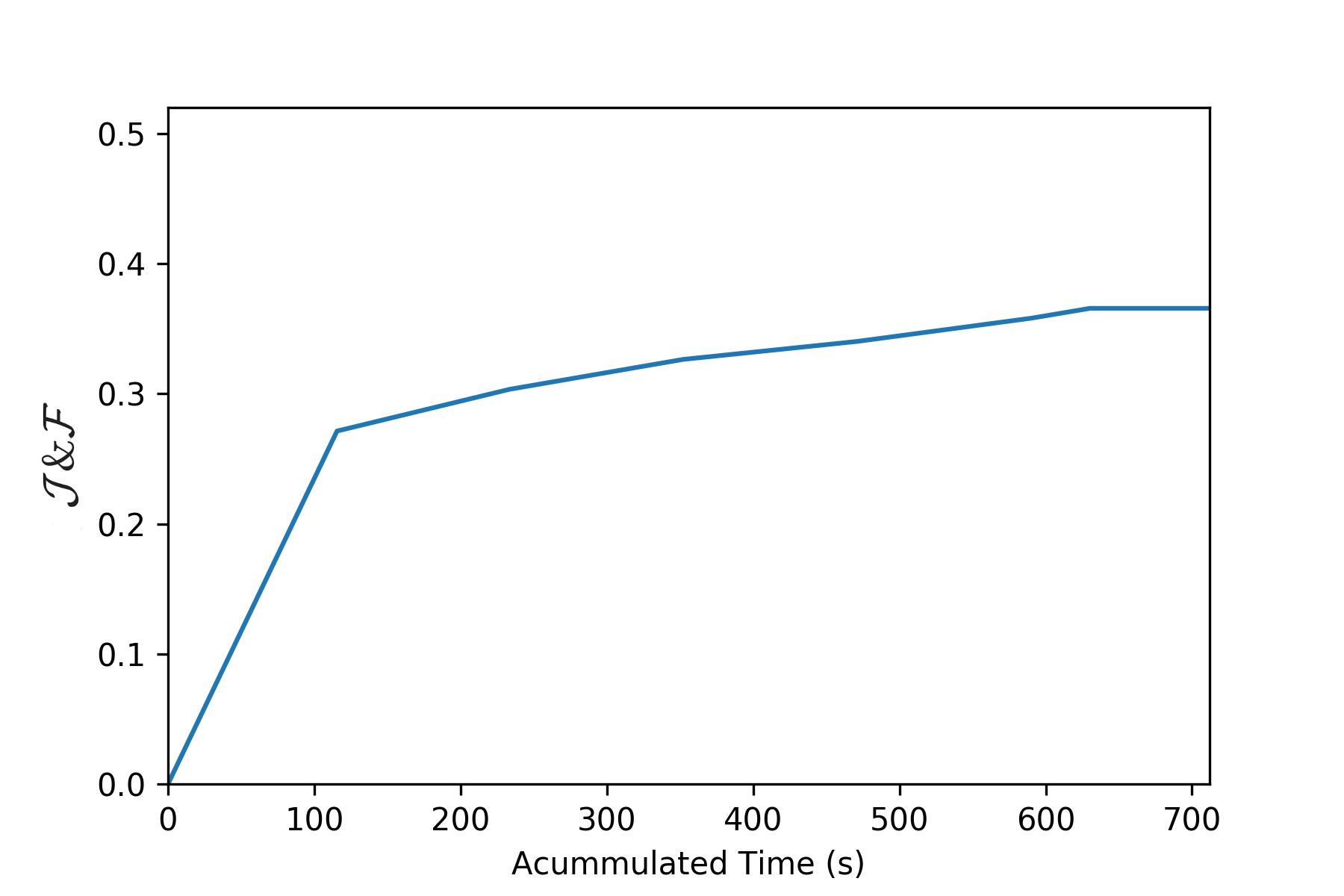 Given this curve, two parameters are extracted to rank the user's models in order to compare them: